A gridshell is a light structure composed by a grid of laths that are shaped into an organic surface similar to a shell.

The strength of this structure depends on its double curvature, able to create innovative shapes using a minimum amount of material. These properties make gridshell an interesting construction method for designers and structural engineers, who are able to design flexible and innovative spaces without a massive architecture.

In Crans Montana we made a concept proposal for a multifunctional centre, experimenting a gridshell approach.

The proposal was conceived in a short time to give an idea of how we could use this technique, and is part of the Crans Montana hotel project in which we are involved (know more).
The design of a gridshell starts with the creation of a two dimensional grid of laths, usually made by timber or steel, pinned at their intersections in one or more layers. Pushing the edge of the structure it’s possible to deform the grid in a third dimension, transforming the quadrangle meshes into rhombic shapes. This process requires a gradual releasing of the internal stresses at the joints, which can be fixed also with diagonal bracings to make the structure stronger.

Thanks to parametric technologies it’s now easy to create curved structures with a numerical optimization, and gridshell is becoming an increasingly common practice.

Gridshell design was pioneered in 1896 by Vladimir Shukhov, during the All-Russia industrial and art exhibition in Nizhny Novgorod, and had a great development with the Multihalle in Mannheim by Frei Otto, Carlfried Mutschler and Joachim Langner. This pavilion, designed in 1975, is one of the first visionary projects based on a gridshell roof, and has been listed as a historical cultural monument since 1998 for its innovative approach. 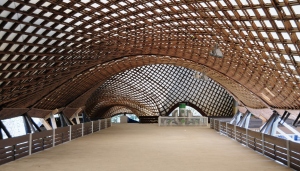 After these earliest projects, gridshell structures have been used at different scales in many contemporary constructions, for both temporary and permanent buildings. There are several examples of pavilions or artistic installation created with this kind of structure, thanks to its lightweight and resistance. An interesting light structure is the Observation Tower in the Helsinki Zoo, that has a particular curved shape similar to a “Bubble”. 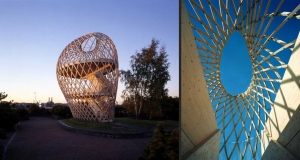 The Centre Pompidou-Metz by Shigeru Ban Architects is a perfect example of how gridshell can be used in a complex building, creating indoors spaces with different volumes. In this project the roof and the interiors are organized in a dynamic composition, with different sections and glazed walls. We can see another approach in The Savill Gardens Gridshell, by Glen Howells Architects, where the roof seems placed over the base as a separated wavy element.

In our project, one of the main challenges was the connection between the gridshell and the sloping site. Most of the existing gridshell structures are built on a regular ground, which allows to compose the roof and the other parts of the building without facing different heights.

The first idea was to create a basement able to connect them, designing the gridshell only as an independent light structure over a public square. Than, we decided to develop an architecture in relation to the ground, shaped as a petal which in some points touches the soil and in others rises creating different views on the landscape.

We used the sloping site to create two different entrances for the project, giving the possibility to connect directly the building both to the city and to the hotel.

The interior is designed to be flexible, with an empty space that visually connects the different levels. In this way at each floor of the building it’s possible to see the landscape outside, and the natural light creates a beautiful shadow effect.